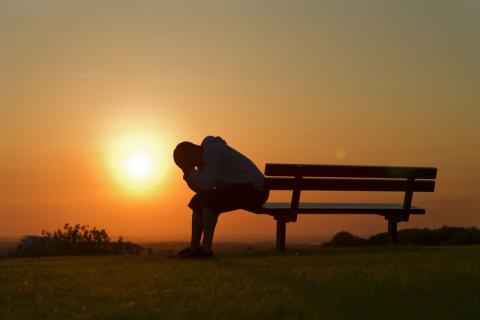 Contributor
I write about Suicide

This is what it’s like to lose a friend to suicide.

And succeed isn’t even the right word, it’s too positive. But they have “succeeded” in this one last thing and now they’re gone and you’re surprised and shocked and you don’t really understand even if you’ve been suffering too, even if you’ve tried, even if you’ve already lost a friend or two like this.

There is no information at first, just the fact that they’re gone and you scour the newspapers website, refreshing the page over and over because eventually it has to tell you something. Anything. There has to be an answer somewhere to explain why. You need to know why, why and how and exactly when, all the exact little morbid details and then you’re following trails of information around and making calls to coroners and funeral homes because you’re desperate, desperate for anything, any shred of information. Any hint of an answer.

And no one ever mentioned in those five stages of grief people talk about all the time that obsession would be one of them, and that years, God damn years later, you would still be reading articles about the last friend you lost to suicide you bookmarked on your computer as some sort of last attempt to hold onto them, even though they’re gone and have been gone for over four years. And now it’s another friend gone and you’ll be bookmarking their articles too and reading them every now and again and searching for their names in the newspapers and Google and hoping other friends know something, anything, because your own experiences, your own desperation, doesn’t seem to give you any understanding at that moment even though you’ve tried yourself, taken your own overdoses and cut your own arms.

When there is information, it’s just that — information. Words and facts and not answers and it doesn’t help, doesn’t help at all. It feels like you’ve been punched in the gut. You think you might actually throw up and your eyes burn to cry but you can’t cry any more this week, you’re empty and you think you might be dehydrated though you’re not sure that’s even possible but thinking about it is a distraction from the fact two friends did the same thing, died the same way, in the middle of desperate moments, under the care of a mental health team, while you thought, you thought they were getting better.

They had gotten clearer but not better.

Not better, just more able, more in control and able to plan and get it right this time. Get it “right.” Still too positive.

You think — about their last few minutes, writing the notes and taking those last few steps and not even crying, just a clarity of mind you’ve never felt when even trying to kill yourself, and maybe that’s why they’ve done it and you’re still here. You wish you have been there, because you would’ve physically stopped them, or supported them or done something but you weren’t, you aren’t there, you’re far away.

Even a few miles, a town away, becomes a sea suddenly, and it’s your fault you never swam across to check how they were, checked more often, checked just recently. And you know, you know, you would’ve have been given the truth — they had to have their feelings dragged out of them — but you blame yourself anyway. This is your fault and you wish you were all together. You’re in the next town, the next county, the next country and they’re gone and it’s too late and the anger bubbles up next. You manage to push through the anxiety to anger and you blame the people who were supposed to look after her, cause the mental health team have messed up again, and you’ve lost another friend and you’re not sure you could even turn to them for support in the middle of a crisis they caused.

There’s not much energy for anger, because you want to blame people, want to blame your friend even, but it’s not anyone’s fault. There is not fault. There is this illness that takes over, takes time and energy and personality and leaves just this shell behind. A shell that only really has the ability to end it all and then it’s over, they’re gone, even though they really went a while a go, but no one really noticed because hiding, hiding what’s wrong, hiding cuts and scars and tears and everything and anything that would give you away.

And you know this, because you’ve done this and just cause you’re better now, improved, a complete person, doesn’t mean you’re not left with scars and anxieties and now this overwhelming sadness because you’ve lost another friend, and it’s spiraling out of control because you can’t get up, wash up, get your mood up.

You’re not sure you want to because they’re not getting up. Ever.

It’s not OK, it’s not OK. Not right now. Not for a little bit, even with the support of other friends, and family and your beautiful and understanding wife and the distraction of your life as a whole and your niece is asking why all the time and your nephew has even more questions and then, a few months down the line, the sadness, that overwhelming sadness, will be gone, will have disappointed, without you really realizing it was even happening. Then a few years later you’re living your life again, exactly as you were before, because it gets you no where, that sadness and anxiety.

You don’t forget though. A flash of a green coat, a haircut on someone, something on the pavement and that wave of sadness is back, greatly reduced but there, teasing your heart with a little hope that it was all a dream after all and you’ll wake up and they’ll be back. They’ll all be back. The reality is cold again and you keep walking, a little sadder than you started the day, and you walk over all three drains in a row in the pavement because that’s what your friend did as part of her OCD. That becomes part of your OCD because that’s all you have now to keep close to them.

A few photos and a ritual that was never yours to begin with, but you take and keep with you. Even though you can’t quite explain why.

If you or someone you know needs help, please visit the National Suicide Prevention Lifeline. You can also reach the Crisis Text Line by texting “START” to 741-741. Head here for a list of crisis centers around the world.

The Crisis Text Line is looking for volunteers! If you’re interesting in becoming a Crisis Counselor, you can learn more information here.